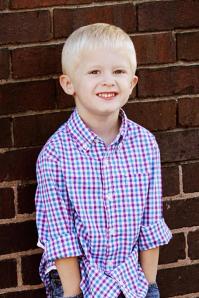 It all began with a tweet: “Never knew all AEAs do until I saw what they did for this dude the first 3 yrs. of his life! #thankful.” Accompanying the tweet (a 140-character message on the social media site, Twitter) was a picture of a chipper blonde-haired boy. With a little digging we found out who this little “dude” is. Parent and Jensen Elementary Principal (Urbandale), Mark Lane, responded to our query:

Through Cal’s early care, it was recommended that the family do a hearing assessment. From the assessment, the family learned that Cal had a moderate hearing loss in his left ear. He was fitted for a hearing aid before he was 2 months old.

During the first few years of Cal’s life, Jennifer Downs, a school social worker, Anne-Michelle Pedersen, itinerant teacher for the Deaf/hard of Hearing, and Heidi Webber, occupational therapist, visited the Lane home as part of the AEA’s Early ACCESS program.

Cal was closely monitored to ensure he was reaching the same communication
milestones as his hearing peers. Other areas of his development were also assessed such as his fine motor, gross motor, cognitive, problem-solving and social-emotional skills.

As part of Cal’s early intervention plan, the AEA staff encouraged his parents, Mark and Carla, to use some communication strategies that would help improve Cal’s receptive and expressive skills. These strategies included making sure background noise was minimized and that people looked at Cal when they talked to him. AEA staff also linked Mark and Carla to resources such as Signing Time! DVDs, sign language classes and auditory listening activities that would help improve Cal’s comprehension skills.

Downs credits much of Cal’s success to his parents. “We maybe provided some ideas and strategies they could use, but they were the real teachers,” she said. “They followed through and worked with him on a daily basis.”

The hard work of everyone involved paid off. When Cal turned 3 ½ years old, it was determined that he no longer needed AEA services because he was doing so well. Before she bid the Lane family farewell, Pedersen made sure to talk to Mark and Carla about any future assistance the AEA could provide if Cal needed extra support in school because of his hearing loss.

“We feel lucky to have been in the NICU and for all the support that followed,” Mark said. “Their (AEA staff members’) work with Cal and the training they gave us set him on a road to school readiness. It would have been very different had we not been aware of Cal’s loss until he had gotten to kindergarten.”

This entry was posted in Area Education Agency and tagged Heartland AEA. Bookmark the permalink.

Tell Us Your Story: Cancel reply